The greatest songs of all time (in my world, at least)

I wish there was an objective standard to measuring the quality of art. There is not, so we are left with subjective opinions, and popular music is no exception. While I acknowledge what I call the Citizen Kanes of contemporary music, such as Stairway to Heaven, Imagine, Purple Haze, etc., they don’t stick with me quite like some other lesser-known, but equally as relevant, works. In compiling my best of list, I focused on what incites passion and other intense feelings in me, as well as containing technical brilliance. This is what I found.

Honorable mentions (in no particular order):

I wonder if ten years from now, this list will at all change. Not from the current state of music, unfortunately. These songs take me back to the times before Auto-Tune. Those days are gone. Alas.

The Ploy of Painting 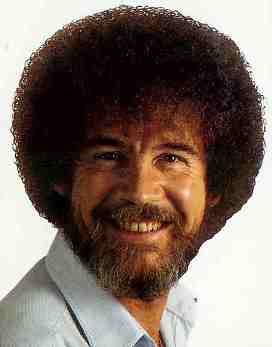 Who doesn’t know Bob Ross—the inordinately hirsute art instructor and television personality? His half-hour program, The Joy of Painting, aired from 1983 to 1994, and brought the creation of decorative art into millions of homes around the world.

Don’t get me wrong by my sarcastic pun of the title—Bob Ross had a significant influence on the art world. He discovered and shared a way to make painting accessible and inviting to those normally daunted by the idea of picking up a brush and applying it to canvas. He made it fun and leisurely, and sparked creativity in children who happened to catch his program on public television, including yours truly. He was also philanthropic; he donated his programs and paintings to public stations, and made his living only from the sale of his books and instructional videos. He can’t be faulted for that, right? Of course he can!

First off, I must point out the obvious: What was UP with that frizzy ‘fro, and why so much of it? To top it off, it was a perfect sphere around his skull, like a halo in a medieval painting. How was hair that unruly cut in such a way that every last coiling strand was tucked into a pristine bubble? It was like Mr. Miyagi went all bonsai tree on him every time before the cameras started rolling. Was that beard a continuation of the mop growing from his scalp? It was like he bought it by the yard and wrapped his head and face in it like a keffiyeh.

Bleh. I just got bitch-slapped by an annoying thing called my conscience. I logged in fully intending on ripping this poor guy to shreds until only a pile of viscera and fringe was left in my wake. I just can’t do it, for the simple reason that this guy was just too darn nice. Besides the aforementioned generosity, he clearly made a career out of doing something that he loved. Plus, he worked up until the year before his untimely death—of cancer, no less. Why did it have to be cancer? Bah! Grabbing onto his nappy coif and dragging him through the mud just would not be sporting. I might as well kick a terminally ill child’s puppy while I’m at it. Dammit. Blast you, Bob!

So, I am left with going gentler on his legacy. I’ll try to still make it fun.

Even as a kid, I noticed the preponderance of pine trees in his paintings. It seemed like everything had a pine tree. If you don’t believe me, here are a few examples: 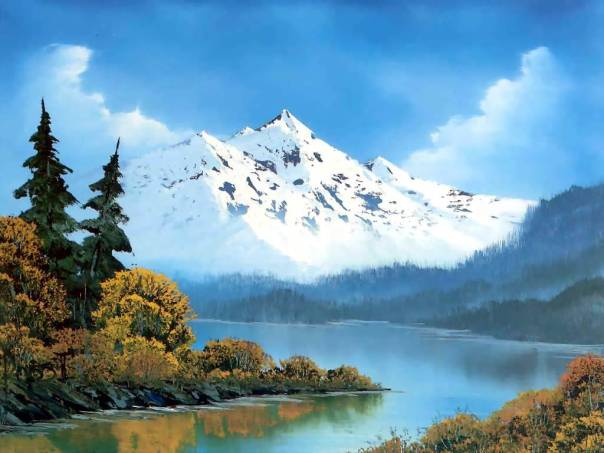 See? There they are on the left. 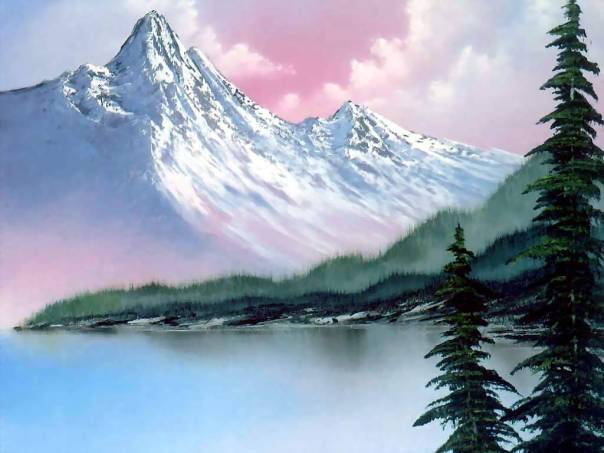 They moved to the right. Those sneaky bastards. 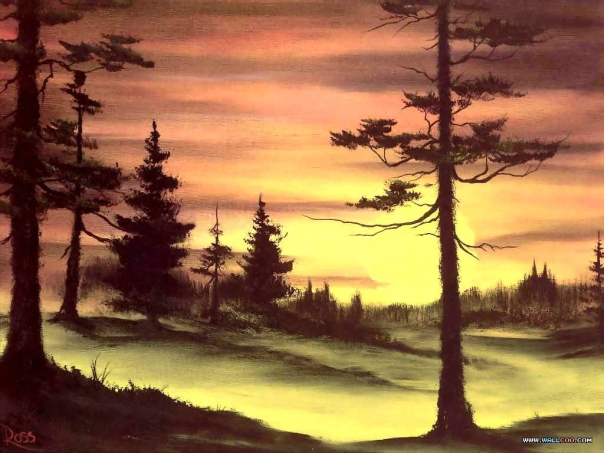 There is more evidence, but frankly, I was getting annoyed uploading these photos and positioning them. They aren’t in every painting, but they are in a lot of them. A lot. Plus, he painted them the same way. He scooped up paint with his palette knife, made a line on the canvas to suggest the trunk, then took a dark green mixture (probably ivory black and phthalo green) on his brush and whoosh whoosh whoosh, painted the foliage by smashing the brush in alternating angles down said trunk. It was difficult for this method to not be singed into the viewer’s memory, because he did it so often. What does this mountainous landscape need? A pine tree! How can I make this river scene idealic? A pine tree, of course! What shall I do to round out this galactic tableau? Whoosh whoosh whoo . . . okay, that probably didn’t happen. I think I’ve made my point with this one and can conclude that the dude really dug pine trees. I’m partial to painting skulls, knives, and droplets of blood in my pieces, but as Bob would always say, “It is your world.”

While an art student, I posed the following question to some of the faculty: Would Bob Ross do well in their class? Every time, I got a resounding “no”. It turns out that Mr. Ross’s mane got tangled in the craw of many professional artists, and was apparently keeping Thomas Kinkade company (that’s a different post and I refuse to pull punches). Why the animosity? Because, he made it too easy. Basically, he took the art out of art, or more to the point, he removed the mystery. How can artists who devote their lives to their craft have it be reduced to such simplicity? They spend months on each piece, laying their emotions bare on the canvas, to only have it trivialized by one man, albeit a well-intentioned one. I admit, as an artist myself, I find the argument compelling. Painting is an extremely difficult undertaking, and takes years to master, if at all. The greatest artists don’t necessarily rest on their laurels; even Rembrandt felt like he still had much to learn. I, along with many others, have spent years and thousands of dollars on an education to achieve the goal of creating lasting works. Truth-be-told, I don’t care to have my passion rendered inconsequential by some hack. There, I said it.

Excuse me while I spit out the sour grapes. PLORK! Okay, I’m over myself. While it is uncomfortable to dilute contempt that positions our egos on a high horse, it is the magnanimous thing to do. While the quality of his art is questionable, I must credit him for starting me on the artistic journey I will be on until the end of my days.

Thomas Kinkade is a whole different story. He’ll reap the whirlwind once I decide to critique him.

Psychopathy: The game the whole family can play

I didn’t think it was possible, but the Fred Phelp’s clan has sunk to an all new low. It is no surprise that they seize on any opportunity to further their message and vilify the Hell-bound heathens of this world. However, I’ll admit that preying on the tragedy of a young girl’s death, just to prove their point, was not a possibility that came to mind. But yet, that is precisely what they are doing as I write this. Like jackals, they are vomiting on the tragedy of others as they feed on it.

Let’s call a spade a spade with this one: Fred Phelps is a psychopath. He has gotten this far in life because he hides it behind religious sanctimony in the form of Westboro Baptist Church. He has spread his mutated seed to a family bred of pathologies. If his minions were not born that way, they certainly were raised to be like that. Call it what you will: nature versus nurture; psychopathy versus sociopathy—it all results in the same carnage, emotional or physical.

“Thank God for the shooter!”  Really? They want to thank a deity for making someone “mentally unhinged” (that is a whole different issue) enough to lay waste to a group of people who were peacefully supporting their beliefs? Again, really? I am compelled to point out that Jared Loughner was also described as a “pot-smoking loner.” Isn’t partaking of the evil weed a sin in the eyes of their god? I am struggling with the paradox there. Oh wait, it’s just hypocrisy. That makes more sense.

Don’t think for a minute that they are completely blinded by their delusions. They are very calculating in their actions. Notice that they only incite violence, not commit it. Because of that, they can build a fort out of the First Amendment as they shoot their vitriol from behind it. That doesn’t make them less nefarious. There are a lot of psychopaths who do not get blood on their hands. Charles Manson is one who comes to mind.

What will it take to stop them? As long as they only speak—sticks and stones and all that—they have a right to air their stench. I argue that it isn’t a fundamental right but a priviledge. As usual, there has to be someone out there to abuse it and spoil it for everyone else. Given enough rope, they will hang themselves. But, at what cost? If we put a gun in their hands to see what they do, while at best a social experiment, risking the consequences is not an option. What must be addressed is, again, what has been hard-wired in this congregation. While they may not be very effective or galvanized individually, as a group, they have tremendous potential. They are a (cross)hair away from being no different than the Nazis.

If you think that is an overly dramatic fear tactic, think about this: About 3% of the population is homosexual. It is a difficult statistic to capture accurately, as society has conditioned themselves to think it is wrong, hence many don’t ask and certainly don’t tell. Based on this number, if the Westboro Baptist Church had their way, they’d surpass the Holocaust by a factor of three. Genocide, anyone?

Here is my second installment of ponderings. They’re just as random as the last batch.

And again, where do I end this mess? There was an overwhelming religious and deviant sex theme with this group. Hmm.